The Fine Art of Saying “NO” 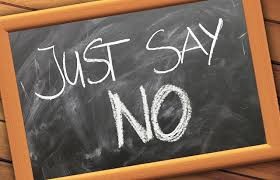 How many times have you caught yourself saying ‘YES’ when what you really wanted to do, was to say, ‘NO’?

Yes, it isn’t easy especially when you are ridden with guilt. It’s tough to say it when you don’t want to feel like a douchebag. It feels selfish, hurtful, unloving and harsh and you’d rather not refuse and accept, silently and resentfully to do what you’re instructed, asked, cajoled and forced into doing.

I’ve been that road, plenty of times. I’ve learnt along the way that it’s much better to say ‘NO’ to things you don’t want to do for your own peace.

Simply say the word, ‘NO’. Try it. It wields powers of relief that you are denying yourself. It’ll untie you from the knots you’ll get into by accepting. So, go on and just say it. NO!

There are ways to say it without being offensive.

Do not justify. There, is no reason to lie and invent an ailing relative or feeding a pet or guests coming over. If a friend asks to borrow money, say something like ‘I’m really not comfortable lending money to people, I’m sorry.’

When you carry on and on about why you are unable to do it, you’ll get into a trap. Friends, family and definitely bosses will provide reasons otherwise for you to say a ‘Yes’. Chart your boundary and stick to it.

If you feel it inside of you to refuse, then go ahead and say it. Your inner voice is a compass of your path. Don’t take the wrong road just to prove you’re taking the higher road.

Instead of getting upset and getting stressed because they repeatedly pick you, just smile and shake your head. That’s it. And, say? Yes, the miracle word, NO!

You might feel you’ll think of something nice to tell them, a bit later. Do it now or you’ll lose the momentum. Say it right then and there.

Sometimes saying an immediate No can make others feel that you aren’t co-operative enough for instance in a career situation, it might seem unprofessional. Providing a ‘what if’ helps you negotiate and suggest alternate possibilities so the person asking gets the feeling you are keen to help.

However, avoid saying No for the heck of it, to prove to people. Say it when you really need to so people understand you come from the space of support and collaboration. It does take practice to say No without offending people, much less saying it in a way that makes those who ask feel happy.

Research suggests that when we make decisions that allow us to change our minds later, we tend to be a lot less happy oscillating between what we could have done, differently. When you refuse to do what you were asked, you need to focus on the good that will come from saying No, instead of regretting or feeling guilty.

Farzana Suri is a Victory Coach and Corporate Trainer residing in Mumbai, India. Visit www.farzanasuri.com for more details. Or reach her on mail@farzanasuri.com